The Dos and Don'ts of Race-Day Etiquette 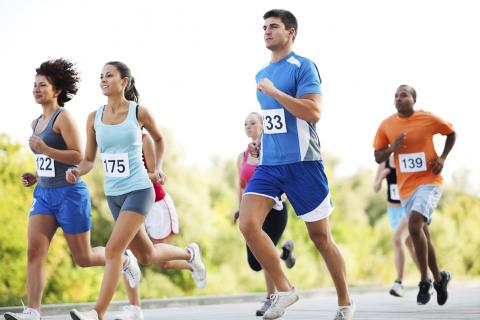 By Jen A. Miller, Runner's World

There are some aspects of race day that no amount of speedwork can prepare you for. Dodging gel packs and water cups comes to mind. But there's also a right and wrong way to race with a friend, slow down for walk breaks, and, yes, wear the race shirt and medal.

"With most large races, it's like being on an L.A. freeway at 6 o'clock at night," says Nick Curl, race director of the Los Angeles Marathon. "You've got a ton of people moving at multiple speeds. You don't change lanes or roll down your window to spit without looking. The same goes with racing—there's a flow that you have to follow."

Here's how to smoothly navigate the subtle points of race day. (What you do the night before matters, too. Learn to practice the Perfect Pre-Race Routine.)

Race in the Event Shirt (Maybe Not)

There's a stigma to wearing the race shirt on the day of the event.  "It's considered bad luck because you haven't crossed the finish yet," says Monica Brookman, a triathlon coach who's led New England Team in Training participants.  But more than superstition, it's never a good idea to break out untested gear at the starting line, says Jeff Decker, race director of the Medtronic Twin Cities Marathon in Minnesota. "You might discover midway that your cool new shirt is uncomfortable, or worse, causing chafing," he says.  That said, if you forgot to pack your singlet and the race shirt is made out of a technical fabric, this is a minor offense that will only offend traditionalists.

You didn't pay for the race? You don't get to run the race, says Decker, who's seen unregistered runners accept everything from water to race medals, leaving later finishers empty handed. Plus, bandits are a safety hazard.  "Having more runners on the course is dangerous and could strain medical resources if the medical staff has to treat both bandits and participants," he says.

Use Another Runner's Bib (Please Don't)

Not only does the race director not have your information if you get hurt, but you could also mess up the timing, ranking and awards system.  "John Smith might not be the fastest guy out there, but he could go out and run fast enough with Jane Doe's bib to win the female age group," says Matt Helbig, CEO of St. Louis's Big River Race Management, which is the timer and organizer of more than 140 events in the Midwest.

It can be tough to wait for your assigned wave to start, but sliding forward into a faster corral is bad all around.  "Most races are seeded by ability level, which makes for a safer and smoother start," says Dave McGillivray, race director of the Boston Marathon. "If someone is in a corral where they don't belong, it can be unsafe and make other runners have a less-than-desirable experience."  Starting in a too-quick group, he says, can also destroy your pacing strategy and throw off your own race.

Line Up With A Pet (Please Don't)

You may enjoy running with your dog, or while pushing your tot, but other competitors probably won't. It's tough enough navigating around other runners, let alone dogs and strollers. You also can't be certain how your pet or child will handle the race scene, says Curl.  What's more, the medical teams may not be equipped to handle pets or children who get sick or injured. That's why many races ban both. It's smarter to seek out fun runs that promote a casual atmosphere, he says.

Portable listening devices are allowed in most races as long you're not going after medals, awards or prizes, and you're not using it to take calls from your coach. That said, even if your race allows portable tunes, it's best to turn them off before the start.  "Folks who wear headphones might as well be on another planet," says Helbig. "They don't hear anything, whether it's a car or you yelling at them that they need to turn here."  If you must run to music, use just one earbud and keep the volume low: You need to be aware of what's going on around you.

Run With A Partner (Maybe Not)

Racing with a friend can help you maintain your pace and provide encouragement. But if you're running side by side, you could be blocking the path.  "Work together to be conscious of people around you," says Brookman. "And never run more than two abreast."  Agree on a signal to go from two wide to one, and decide who'll go first every time.

So instead of diving for the first cup you see, skip the first tables, which are likely to be the most crowded, and set your sights on the end tables. From a few yards out, make eye contact with a volunteer and point to the cup. Then, after you take your drink, exit gracefully.  "Look before you turn back into traffic," says Curl.  If you're taking sports drink, be sure to toss your empty cup into a trash can or to the side of the course. Would you want to run the rest of the race with a sticky leg? The person behind you doesn't either.

No one expects you to stay quiet for an entire race. But skip controversial topics. And don't ramble.

"Pointless conversations show a lack of respect for the other runners," says Bart Yasso, this magazine's chief running officer. No social media, either: "You're not really racing if you're Tweeting or texting."

Sometimes you have to do it. But try not to hit anyone else—and that goes for, well, all bodily functions.

"Spitting, power snotting and passing gas are going to occur while running," says Rob McCrone, head running coach at The Energy Club in Arlington, Virginia. "Just make sure there is no one behind you when you do it."  Performing a quick 360-degree survey of those around you before you let loose will give you peace of mind. And if you know you frequently need to spit or blow your nose while you run, hug the curb (or learn how to do it right—watch 5 Steps to the Perfect Snot Rocket)

Take Walk Breaks (Go For It!)

There's no shame in slowing down; just take care to work your way to the side first. Otherwise you could easily get slammed by another runner, says McCrone. If you need to slow down because you're hurt or feeling ill, he recommends announcing yourself.  "Put up your hands and yell, 'Stopping!,' to alert runners behind you that something's going to change."  If you plan to run-walk the entire race, stick to the edge of the course, where your pace changes will be less disruptive to other runners.

Large crowds have a way of bringing out the worst in people—and races are no exception. No matter how good you think you are, there's going to be someone better than you. So think twice before you comment on how someone is "only" running the 5K on the day you're doing the full marathon.  Curl says these snarky runners suffer from what he calls MERD: Myopic Event Related Dementia. "That's where somebody is in a race with 25,000 people and thinks they're the only one who matters," he says.

The end is near. Hooray! But don't charge the line at the peril of other runners, or retrace your steps so you have two options for a finisher's photo. Everyone is trying to complete a hard race, so move through the chute and accept that your race mug may wind up not on your mantle but on Uglyracepics.tumblr.com.

Have a Fast Friend Pace You (Maybe Not)

If the "rabbit" has registered, you're in the clear, says Helbig.  "If they paid for their entry and take you to mile 20 and then drop out of the marathon, that's completely legal," he says.  But if they're jumping into the race at mile 20 to see you to the finish, that poses safety concerns—see banditing entry.  "Imagine if everyone had the same attitude and 20,000 people had a fast friend jump in," says McGillivray.

Wear Your Medal After the Race (Go For It!)

You earned it, so whether you're strolling town in your race gear or you don your medal after you've showered, "wear your medal proudly," says Yasso.  But, he adds, after race day, hang the medal on something other than your neck.